haile selassie I protecting the participants

After the great success of the first Midnight race we decided to organize the second one. We changed the circuit trying to keep the same length, around 8 km. After a long a difficult search we found a nice and quiet course in the joyful surrounding of the Maggiore cemetery.

do not disturb guests!

At 11 pm people started to reach the starting point, after a few minutes we were reached also by a police car, such a nice surprise!, who lately left after some vague assurances…
Things was way more serious than the previous year, there were some real weapons ready to be used and a couple of teams were composed by real bikers, not beer-drinking-bikers as we are. A total of 11 teams were registered. 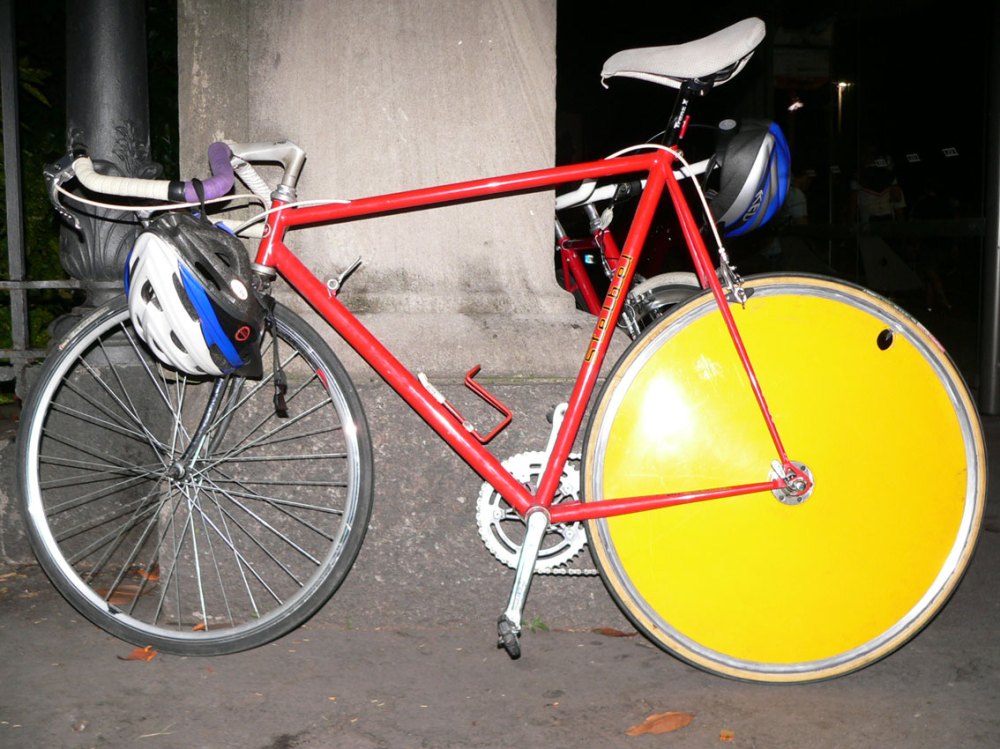 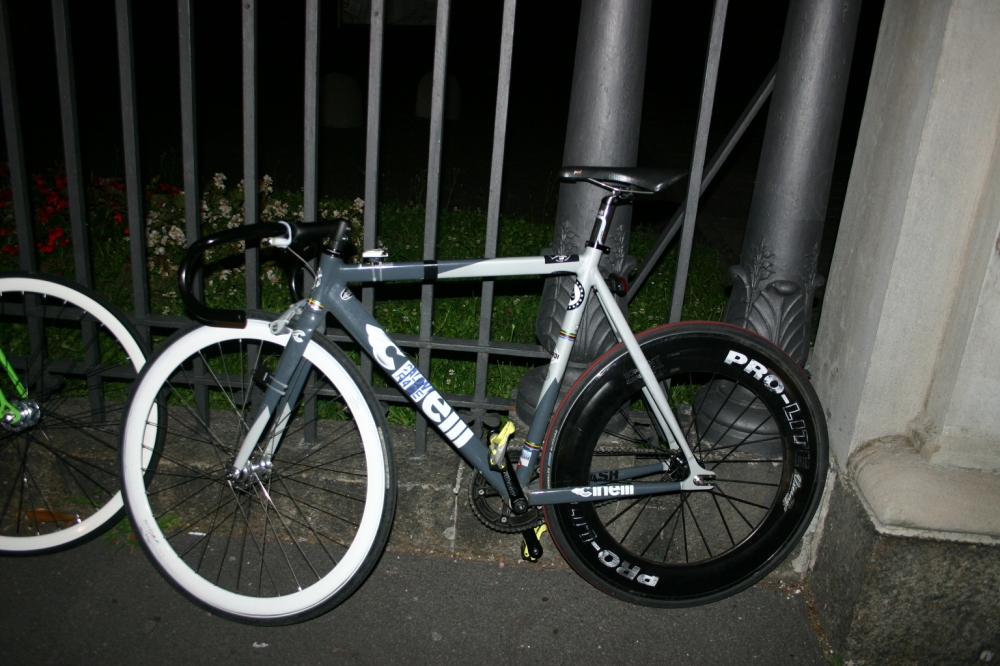 a cinelli mash, I want that rear wheel!

At 11.30 pm we were ready to start with the first team: Casbah 1. The track was free, few cars were around, but in the second part of the course a strong wind came frontally. At the halfway of the first lap I began to have hallucinations, like Fausto Coppi blaming me because I wasn’t in good conditions or Eddy Merckx having fun of me, so I asked Giò and Riki to slow down a little bit.
We ended in 11′ and 49″ 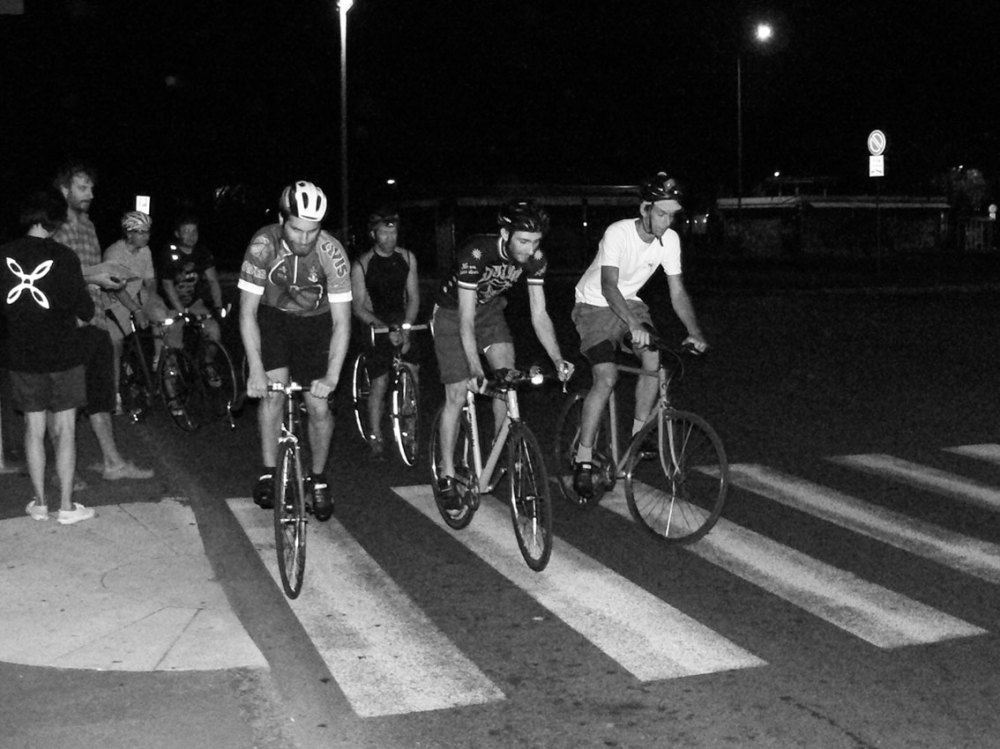 then all the other teams started under the perfect supervision of Emi and Laura, our official referees. The last three teams were the bookmakers favourites: Les Palmares, Les Trois Pistards, Team Ciclistica.
as we were approaching to the end the audience was raving! 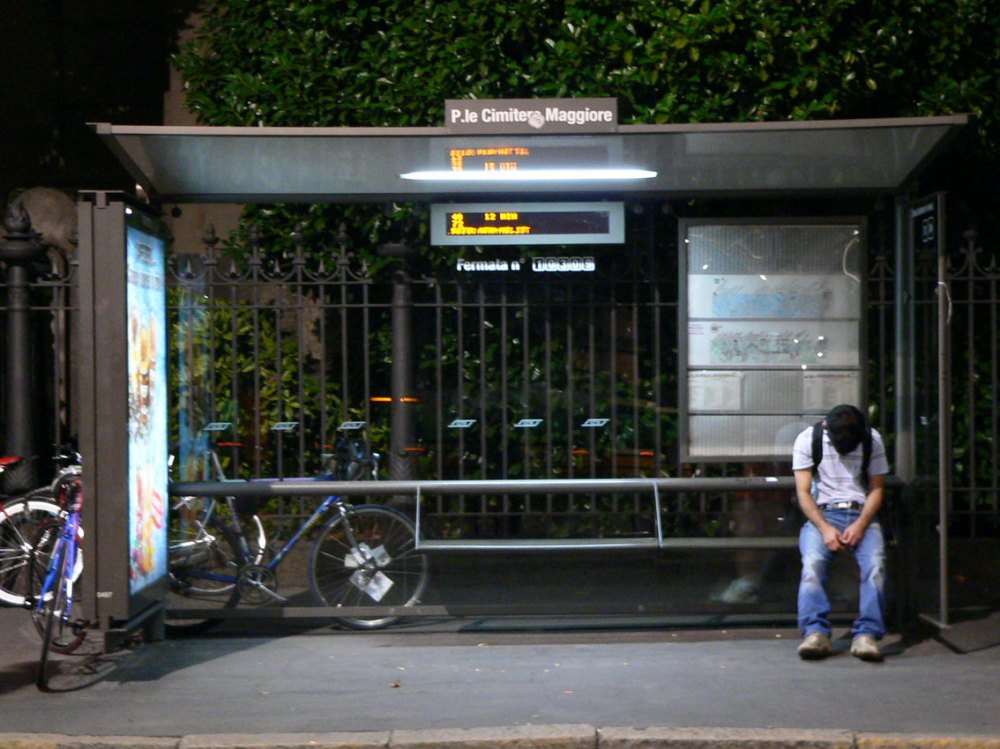 But unfortunately, shortly after “les Palmares” left the starting line, our good old friends of the police appeared again.

We tried desperately to convince them that we were there just biking as friends, that everybody was wearing helmets and lights, that we loved out country and our city and so on. But there was nothing to do. After a few minutes they started to ask for our ID complaining that we were doing something illegal and suggesting us to use Vigorelli velodrome for our competition. By the way Vigorelli is closed since 1988. So at the end the evil forces won and we were forced to interrupt the race.
That was really frustrating for several reasons: first of all we were doing nothing wrong; second: Milan has some more serious problem to deal with; third: policeman in Italy are always bulling normal people avoiding real criminals (especially the council police).

an exclusive document of the midnight race riots

Anyway the partial classification was:

trying not to think about the unfairness of our local police we moved to a little park nearby and started the after-race routine.
Prize giving ceremony and magic tricks like the complete disappearance of 50l of beer in less than one our.
Thanks to everybody, to Marco and Edo for some pictures here, to Laura and Emi for the perfect time-keeping and organization, to Guido for the amazing flyer, to Cris for her patience.
Some better pictures here.
See you next year!